IMPORTANT: Mr Smith Casino is no more. In 2019 it rebranded to LiveRoulette.com.

Mr Smith Casino was initially called Harry’s Casino, but due to a relatively unimpressive financial record, the decision was made to re-brand with its current name in an attempt to revitalize the business and attract more players.

This re-brand proved a wise move all in all, and today, Mr Smith Casino are one of the more prominent names in the UK online gambling scene, albeit not quite as prominent as some of the market leaders like Bet365 and Betfair.

Still, for players looking to enjoy a high quality, safe, and reliable gambling experience, Mr Smith is a casino that’s definitely worth checking out, and in the following post we’re going to take a look at the casino in detail.

Mr Smith offer games from a number of different software providers including Microgaming, NetEnt, Cryptologic, Evolution Gaming, GTS, Jadestone, and Thunderkick. New games and occasionally new providers are continually being added to the site, and while you may not see new developers as often, you will see new games added once a week or so, in general. This ensures you won’t get bored with the same old games, and allows you to enjoy a consistent stream of new titles that you might otherwise fail to notice.

Video slots, however, is by far the most comprehensive category at Mr Smith, boasting hundreds of games ranging from classics like NetEnt’s Starburst, Jack and the Beanstalk, Gonzo’s Quest, and Twin Spin; to Microgaming’s Immortal Romance, Thunderstruck II and Dragonz.

If neither table games nor video slots take your fancy, there are also a number of other games for you to choose from, and these include instant win games such as Emperors Garden Scratch, Ramesses Riches, and Scratch: Irish Eyes; alongside Video Poker titles like Deuces Wild: Double Up, Jacks or Better Double Up, and Joker Wild.

You’ll also be able to play titles like Fruit War and Flame Busters (from Thunderkick); and Gold Lab, Dragon Shrine, and Wins of Fortune – three titles from the newly added and aptly named software provider, Quickspin.

If you’re a fan of progressive jackpots you’ll more than likely be happy with the range offered at Mr Smith Casino. While the games on offer here aren’t quite as plentiful as at some of the largest sites, Mr Smith do offer a decent selection, made up of games from both NetEnt and Microgaming.

Relying on the pooled jackpot system, all the games allow you to win life-changing sums of money from stakes as low as £0.20, and million-pound jackpots can be found in multiple titles from the developers.

To view all of the jackpot games on offer, simply click the ‘Jackpot’ tab from the main game navigation menu, where you’ll be able to browse the games on offer and view the jackpots attached to each game.

With a large game selection powered by Evolution Gaming, Mr Smith’s live casino is generous both in terms of the games on offer and the low (and high) betting limits available to players.

Whether you want to have a go on the Roulette or Blackjack tables, or you want to try something a little different and enjoy a poker themed game such as 3-Card Poker or Casino Hold’ Em, Evolution Gaming ensure you can always find a live dealer game to take part in.

Most of the live games have betting limits as low as £5, and the Roulette has even lower minimum stakes, with most tables offering the ability to spin from as little as £1 a go.

This is obviously beneficial as it means players on lower budgets can still get in on the action; but if you fancy yourself a high-roller and want to bet more, you’ll find games with betting limits as high as £1,000, and a few select games even offering as much as £5,000, subject to the maximum bet limits applied to your account (if any). 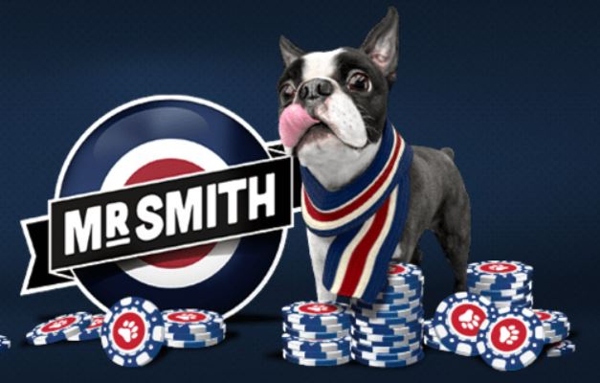 Mr Smith may not have the most aesthetically pleasing website in history, but they do ensure the overall functionality and reliability of their casino is as robust as possible; and whether you’re a seasoned vet who’s played at hundreds of casinos, or a new comer with little experience of the online casino world, you’ll certainly be pleasantly surprised by the usability and speed of the site.

Everything is made as simplistic as possible, and there is virtually no learning curve when it comes to using the site. This is helped by the easy to use navigation bar found at the top of each screen, and the game category menu found on the left-hand side of almost all pages makes navigating to the game you want a minor task.

The only thing we feel could be improved upon, is the cashier section (otherwise known as banking), as Mr Smith use a bit of a dated interface and design. This won’t affect your time playing at the site, but is worth pointing out as it can be a little hard to get your head around as a new player.

Overall though, Mr Smith Casino is built to incredibly high standards, and it’s unlikely you’ll experience any issues while using the site. 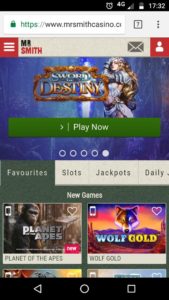 Mr Smith Casino were one of the first online gaming sites to offer what’s known as an identical mobile website; in other words, one that is exactly the same as the desktop website, albeit optimised solely for mobile use.

This means you’ll enjoy (nearly) the exact same game range you’d find if you were playing from a desktop device, and you’ll also to use the game selection menu and main navigation bar, although again these are optimised for mobile viewing.

While it’s a little disappointing not to see a dedicated iOS or Android app (this may change in the near future), it’s important to point out that the mobile website can be enjoyed by players on all types of device, with the operating system and phone manufacturer being largely irrelevant.

A working internet connection and a mobile browser is all you need; just head to the Mr Smith Casino site as normal, and you’ll find yourself automatically re-directed to the mobile site. Easy.

Mr Smith Casino know that in order to keep their regulars happy, they need to reward them with a competitive selection of bonuses and promotions.

This has become harder in recent years due to other casinos operating increasingly competitive promos, but Mr. Smith have done their best to ensure players are looked after; and by running innovative promotions such as the ‘Deal of the Deal’, they’ve managed to compete with larger casinos with bigger budgets.

Deal of the Day works like this: Five days a week from Monday to Friday, the casino offers special perks such as deposit bonuses, free spins promos, and more. To opt in, you simply need to click the ‘Opt-in’ button on the promotions page, and then you’ll see the promotions available each day and the terms and any conditions attached to them.

Unfortunatley, a VIP or Loyalty program is yet to be created at Mr Smith, and rather than only rewarding the players who stake high amounts like some casinos do, Mr Smith have opted to run a promotion that all players can participate in regardless of their spending history.

While it’s a bit disappointing that there isn’t yet a loyalty or VIP scheme, it’s nice to see the casino thinking outside of the box, and trying to look after all players as opposed to just a select few.

Mr Smith Casino offer pretty generous betting limits as well as withdrawal limits; there are also a wide range of payment methods which we’ll cover in just a moment.

The reason there’s so much range here is because different software providers offer different limits on their games, and this means one game may feature a relatively low max-bet, whereas others feature a fairly high betting limit. This obviously applies to the minimum bet too. If you’re unsure of the limits for a specific game, simply open up the game in question and you’ll easily be able to view the limits.

Withdrawal wise, most players will be able to withdraw £5,000 each day. This limit can be increased for higher staking players, although you’ll need to contact the casino directly to come to an agreement and have it implemented.

Payment methods include all major Debit Cards, to EWallets, pre-paid voucher schemes, and even the ability to use direct bank transfers, although the latter requires a pre-arranged agreement with the casino.

Mr Smith Casino was first launched under the name ‘Harry’s Casino’, yet despite its best efforts the casino was never popular enough to attract as many players as it needed to become profitable.

Rather than dropping the business altogether, the decision was made to re-brand under the debatably more professional name ‘Mr Smith Casino’. This type of re-brand rarely proves successful for casinos, but Mr Smith are an exception. In fact, this re-brand was a major turning point for the company, as soon afterwards it began enjoying growth on a scale it hadn’t experienced before.

Today, the casino is focussed on developing partnerships with game developers and software providers, and while the design and infrastructure of the casino isn’t quite on par with some of the larger names in the industry, it’s the game range and variety which keeps its players coming back.