Although they have been in operation since 2007, Kerching is not quite at big hitter level on the online gambling scene. However, their name still commands a certain level of respect from players, and as you’ll see in the following article, a fantastic array of game choice ensures that time spent playing at Kerching will not disappoint.

It’s a unique site in terms of branding that will appeal massively to some players but be the complete opposite of what others want from an online casino, but it certainly makes them stand out among the crowd.

Kerching are a white label of Nektan, but before we get into all of that, let’s first take a look at the games available at this casino.

Kerching Casino offers a vast range of games for players to enjoy, covering everything from video slots to casino table games and live games. All titles are available from the main navigation menu under the ‘All Games’ tab.

It’s also worth pointing out that Kerching offer an impeccable range of game developers at their site so you will have access to all of the latest titles. Just some of the software providers on offer include NetEnt, Microgaming, Barcrest, and Quickfire (a subsidiary of Microgaming).

If you’re more a fan of higher variance games, then Microgaming is probably your best bet, and some of the games on offer here include: Avalon, Emperor of the Sea, Jurassic World, Oink: Country Love, Thunderstruck, Thunderstruck II, and Wild Catch.

While their video slot selection is fantastic, Kerching’s offerings when it comes to Casino Table Games barely merit a mention, with merely a handful of Roulette and Blackjack games listed; and it’s disappointing to see a casino of Kerching’s size offering such a poor choice in this department.

Despite playing host to so many software providers, Kerching Casino unfortunately offer a limited selection of progressive jackpot games at best, with just 12 titles to choose from.

You’ll find a few games from Blueprint Gaming – all of which use the ‘Jackpot King’ progressive jackpot function – but there is just one game from NetEntertainment which is a shame, as ‘Mega Fortune’ – the software providers most notable title – isn’t available.

It’s definitely a shame not to find more jackpot games available, and it doesn’t really make sense either given the number of software providers at the site. Still, Kerching’s progressive jackpot range is OK, it’s just nothing to get excited about.

Kerching’s website is bright, vibrant, and colourful, with a modern design putting it in stark contrast with some of the old school aesthetics we’re used to seeing at other sites.

The website is fairly well built, and while we have a few gripes which we’ll cover below, we particularly liked the joining process. In fact, signing up takes just a couple of seconds (literally), and once you’ve confirmed your email address you’ll be able to get verified and then start playing right away.

Where we feel the site lets itself down is the navigation menu, as annoyingly, you can’t categorise the games by software provider or even their type. Instead, you have to rely on less helpful tabs like ‘Player Favourites’, ‘New Games’, and ‘Last Played’. It’s not very user friendly. There is a search bar, but we’d like to see Kerching offer a better way to navigate their games from the off.

The speeds at the website come in around average. It’s not super fast – probably down to the amount of graphics embedded within each page – but it’s not slow either, and as long as your internet connection is fairly reliable, you shouldn’t encounter any issues. 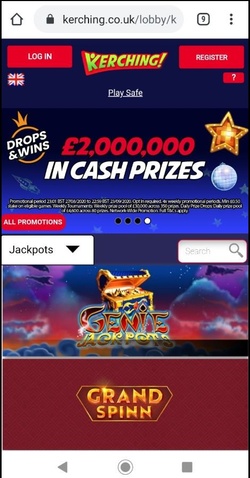 Kerching’s mobile gaming experience is a little less impressive than some of their competitors, and that’s simply because they don’t offer any form of downloadable app.

Putting this aside, the mobile website is actually one of the better ones we’ve seen, and that’s largely thanks to the wide and varied game range. Unlike some casinos, which don’t offer much in the way of variety on their mobile platform, Kerching offer around 85% of their entire game range to enjoy through the mobile website.

Overall then, Kerching’s mobile casino is pretty good, and while it’s disappointing not to see a mobile app, this is something that will probably make an appearance in the near future, so keep your eyes peeled.

Sadly, we feel the banking/cashier section is another area where Kerching could do better, and this is down to the time in which it takes withdrawals to be processed.

Once you make a withdrawal request, it will generally be in a pending state for at least 24 hours, with 3 days cited as the maximum amount of time it can take.

This seems an exceptionally long time given the advances in banking technology we’ve seen over recent years, and 3 days just for a withdrawal to be processed is way too slow we feel; and it appears many players agree, as this is one of the most common gripes players have when reviewing them online.

Still, putting this aside, Kerching do offer generous withdrawal limits of £10,000 per day, and this should be more than enough to meet the requirements of the vast majority of players. If you’re a VIP, you’ll see that this withdrawal limit can increase to as much as £100,000 per day, although this is subject to you becoming a VIP in the first place, of course.

Payment methods available at Kerching include most major Debit Cards, alongside a few EWallets. There are around 7 or 8 payment options available, dependant on whether you’re depositing or withdrawing.

Kerching is a brand owned by Nektan (Gibraltar) Limited, who are one of the largest gambling operators on the planet, with an empire of over 20 different online casinos.

Kerching is actually one of the oldest casinos around, as it was first founded in 2007 making it something of an OAP in online casino years.

Despite not offering the best selection of games elsewhere, Kerching do offer a stellar range of video slots, and by hosting titles from a number of software providers they give their players a huge amount of choice in this area at least. Keep an eye out for new releases from the casino as they are adding to their games list all the time.

As their player base continues to increase it’s likely we’ll see big changes for the better at the casino in the coming years, only furthering your experience at the site.