Gala Casino is a relatively new yet popular online casino that offers gaming facilities to players in the UK and around the world. Known for its reliability and quality, the site has become one of the leading brands in the online gambling industry, with thousands of players signing up each week.

With a strong emphasis placed on fair, honest, and responsible gambling, Gala have been widely praised for their handling of problem gamblers, and by creating an infrastructure that’s both reliable and easy to use, the casino can cater to players on all types of device. Mobile players as well as those on laptops and desktop computers will have no issues playing, and almost all games are playable on both desktop and mobile platforms.

In this post, we’re going to give our honest, unbiased opinion of Gala casino, taking into account the games available, payment methods, withdrawal times, and finishing up with a brief history of the company. So, let’s get started.

There are numerous game options at Gala Casino, and no matter what your personal preferences are, you’ll be able to find a varied range of high quality titles to suit you.

Looking to play classic casino games? Head on over to the Roulette tables where you can keep it traditional and place bets on your good ole’ lucky numbers, or stick to colour betting/odds and evens if you prefer a lower risk and more relaxing game.

If Roulette’s not your thing, you can pick from a number of other casino table games, ranging from further classics like Baccarat and Blackjack; to more 20th century titles including Caribbean Stud Poker, Oasis Poker, Red Dog Poker, Casino Hold’ Em, and 3 Card Poker.

There are also a select number of Video Poker machines for you to play, although the selection is significantly smaller than that of most online casinos.

The casino table games are great, but the video slots are where Gala really stand out, and you’ll find over 600 titles to enjoy.

Choose from many of NetEnt’s most exciting games, including: Lucky Angler, The Funky Seventies, Spellcast, Warlords: Crystals of Power, The Groovy Sixties, Scruffy Duck, Dracula, Well-worth, Steamtower, Lost Island, and Zombies; or try something a little different like Blueprint Gaming’s new title based on the hit blockbuster film, Ted.

Most slots can be spun from as little as £0.20, and with certain games boasting spin limits as high as £1,000, there’s certainly room for the high rollers to get involved as well.

Gala Casino don’t feature the biggest selection of jackpot games but at just shy of 100 titles they are certainly not lacking, and the games on offer are generally regarded as the best in the industry. With jackpots ranging from a few thousand pounds right the way up into the millions, there are chances to become a multi-millionaire from the moment you start playing.

Some of the most popular progressive jackpot games at Gala Casino include: Chests of Plenty, Thor’s Thunder, Fishin’ Frenzy, and The Last Kingdom, and Frankie Dettori’s Magic 7; and that’s just a small selection of what’s available. Head to the ‘Jackpot’ tab on the game selection navigation bar to see the full list, alongside the exact jackpot amounts you could be playing for.

Some pay out daily, some weekly, and the biggest pots pay out every few months or so and can change the winners’ life. 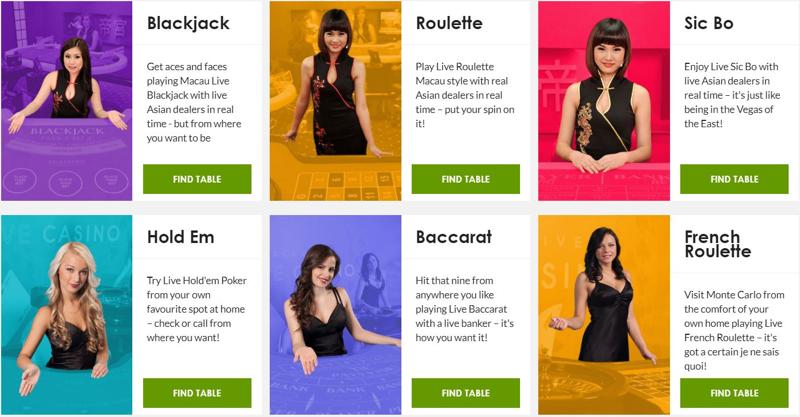 When you open Gala’s Live Dealer Casino, you’ll see three general options – Roulette, Blackjack, and Other. All options have plenty more games within, so there are numerous roulette and blackjack variations or tables with different limits, while the Other games holds everything else including Game Show style games. All of the dealers working on the tables are based in Playtech’s studio in Eastern Europe from where they are live streamed.

Thanks to the high levels of development that went into creating Playtech’s software, Gala’s Live Dealer Games run flawlessly, and you’ll benefit from a crisp, clear, high-definition video stream with audio and chat capabilities built in as standard.

What’s more, most of the games can be played at varying stakes, with betting limits starting from as little as £1, so it doesn’t have to break the bank.

Gala Casino runs on Playtech’s software, and this means it’s interlinked with many other casino sites across the world. This allows you to play for much larger progressive jackpots, as the pot is built from multiple different casino’s rather than just the one you are playing at.

Playtech is one of the most trusted and reputable names in the industry, so you needn’t have any worries or doubts about the legitimacy of the software or games. In fact, Playtech power many of the world’s largest online casinos, including William Hill, Gala and Ladbrokes, so you really are in good hands here.

The website itself is sleek and looks great, and while there are a couple of things that we feel could be improved upon (mainly some of the fine print on the site being pretty difficult to find), all in all it’s a speedy and responsive platform, and available to access from all operating systems and internet browsers. Gala can cater to players all over the world on virtually any device.

iOS players are in luck, as Gala have recently released their official iOS app which can be downloaded free of charge from Apple’s AppStore. It’s easy to install taking a matter of seconds, and once you have logged in for the first time the app remembers your details, and you can log in using a pin code or your fingerprint (Touch ID) going forward.

The same goes for Android users, who need to head to Google’s Play store and download the app from there.

If you don’t own an iOS or Android device then there’s no need to panic, you can access the mobile gaming website through your devices internet browser. Head to the site as normal and you will be automatically redirected to the mobile optimised site.

Note: Playing casino games on a mobile device can drain the battery and chew through your data allowance, so always try to use a WIFI connection where possible and have a charger to hand to avoid a frustrating phone death.

Gala have made it their mission to offer players the most accessible online gambling experience possible, and one of the ways in which they achieve this is by offering a wide selection of payment methods.

Whether you want to use your Debit card or fancy trying out an EWallet like PayPal, Neteller, and Skrill, you’ll likely find a method that suits you. Plus, thanks to fee free deposits, you’ll never have to pay to add money to your account; something we’ve seen an increasing number of other online casinos charging for.

Withdrawals are typically processed within 24 hours, although Gala do state that they aim to process them within 6 hours.

Gala don’t openly state maximum withdrawal limits, but if you’re worried about this it’s best to speak to the casino yourself, as they will be able to provide you with the most up to date information. One thing you can do to help speed up the process though, is to upload your identity documents in your account area as soon as you join so that there’s no reason for your withdrawal to be delayed.

Gala Casino is owned and operated by LC International, having been known as the Gala Coral Group before that. Ladbrokes and Coral joined forces to create LC International and where then acquired by an even bigger fish, GVC Holdings. All very complicated, but essentially the Gala brand still runs as its own entity and has gone from strength to strength.

In March of 2015, Obodo, a Gibraltar based gaming developer, signed a deal that saw over 50 new games added to the Gala website. That may sound insignificant, but it was really the turning point for Gala as it attracted players from all over the world.

Mobile gaming is something the casino is focusing on heavily at the present moment in time, and we’re also seeing a huge rise in the number of HTML5 games, with software providers opting to stay away from Flash now that it is going out of use.

For this reason, we expect to see Gala to carry on in a similar vein, and to enjoy continual growth both in terms of game numbers and their player base.